Fibet’s anti-vibration products may not have prevented Crank-E from taking a mechanical mauling, but they did an impressive job of limiting damage.

There are some things you don’t see in your average episode of Robot Wars. Usually, while Dara O’Briain and Angela Scanlon are interviewing the teams and asking what went right/wrong, there’s a team out of shot sadly shovelling what’s left of their robot into a proverbial (or literal) bin bag.

But that wasn’t (quite) the case for the Cold Fusion Team. True, their robot Crank-E may have been bested by one of the hot favourites. And insult may have been added to injury when house robot Shunt decided to let rip with its pickaxe. But Crank-E escaped with relatively little internal damage, a fact that was all down to a design incorporating Fibet rubber bobbins. 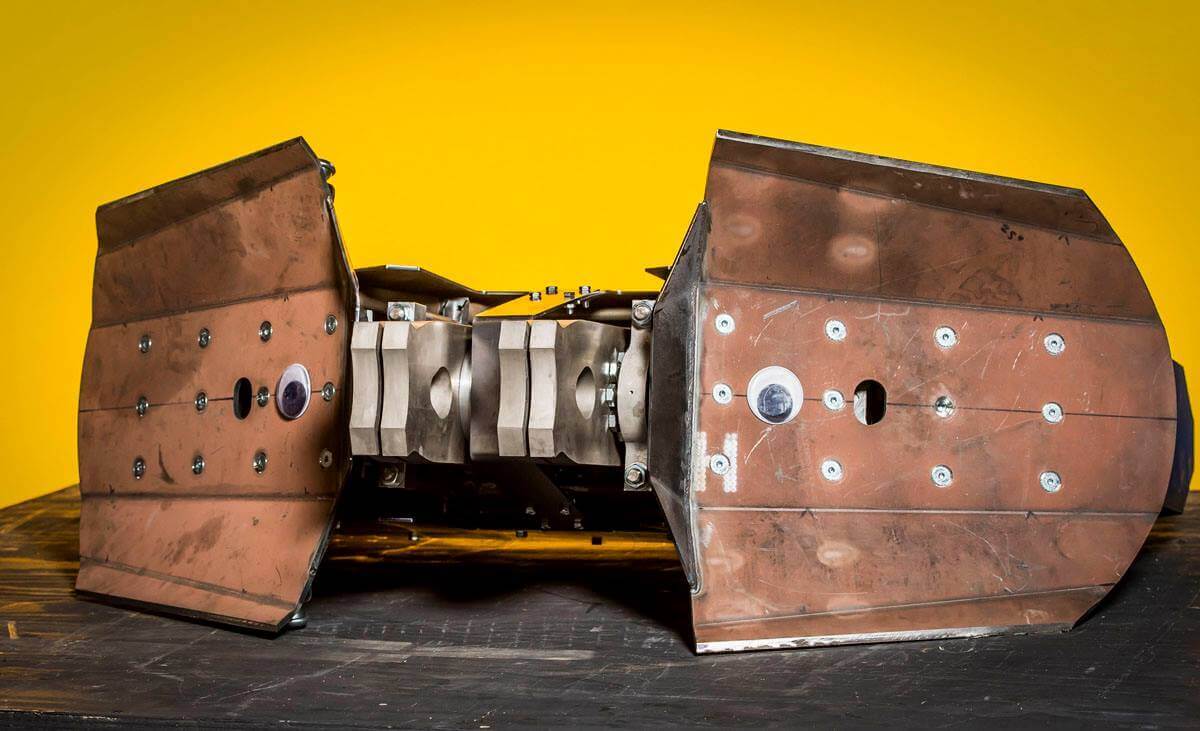 The Cold Fusion Team were experienced robot builders and Robot Wars veterans. They knew all about the strict weight and size limitations imposed by the programme makers and that gave them a real challenge when constructing compliant external armour plating and the weapon sub-frame. A further challenge came from the fact that no team knows precisely what form or force of impact they’ll be facing – from buzz saws and angle grinders to picks and spikes, the potential arsenal is almost limitless.

> View our extensive range of products

The team’s initial solution of fail-safe design shock absorbers didn’t fit with the size requirement, so the alternative was to use many bushes in parallel to protect the chassis, motor and electronics.

“Fibet brought experience and enthusiasm to the project and were a pleasure to work with,” said the Cold Fusion Team. “If the outcome was not entirely successful, it was due to the challenging weight and spatial requirements, and the harsh operating environment. Despite the robot taking a beating from one of the top competitor robots and a house robot, the rubber bobbins protected the internals and chassis from severe damage and allowed them to be reused.”

Do you have an engineering project that needs to take a novel approach to engine mounts, bobbins and buffers? Call Fibet now on 01282 878200 or email us at sales@fibet.co.uk Agricultural Automotive Compressors Distributors Electronics Generators Groundworks Health & Leisure HVAC Kanban Lifts Maintenance Marine Military O.E.M Pump Test / Laboratory Trains Wind Turbines
We use cookies on our website to give you the most relevant experience by remembering your preferences and repeat visits. By clicking “Accept All”, you consent to the use of ALL the cookies. However, you may visit "Cookie Settings" to provide a controlled consent.
Cookie SettingsAccept All
Manage consent

This website uses cookies to improve your experience while you navigate through the website. Out of these, the cookies that are categorized as necessary are stored on your browser as they are essential for the working of basic functionalities of the website. We also use third-party cookies that help us analyze and understand how you use this website. These cookies will be stored in your browser only with your consent. You also have the option to opt-out of these cookies. But opting out of some of these cookies may affect your browsing experience.
Necessary Always Enabled
Necessary cookies are absolutely essential for the website to function properly. These cookies ensure basic functionalities and security features of the website, anonymously.
Functional
Functional cookies help to perform certain functionalities like sharing the content of the website on social media platforms, collect feedbacks, and other third-party features.
Performance
Performance cookies are used to understand and analyze the key performance indexes of the website which helps in delivering a better user experience for the visitors.
Analytics
Analytical cookies are used to understand how visitors interact with the website. These cookies help provide information on metrics the number of visitors, bounce rate, traffic source, etc.
Advertisement
Advertisement cookies are used to provide visitors with relevant ads and marketing campaigns. These cookies track visitors across websites and collect information to provide customized ads.
Others
Other uncategorized cookies are those that are being analyzed and have not been classified into a category as yet.
SAVE & ACCEPT